WEP April Challenge When Love Takes Your Freedom Away

Greetings. It's April 2021. How is your year going? I trust it's better than last year.

It's time once again to post for the Write, Edit, Publish Challenge. Thank you to the host, Olga, Renee, Laura, and Nila, and a special thanks to Denise for starting this fun group.

Today's theme: Freedom Morning. I struggled with this challenge. I'm American. Freedom is part of our identity. We are the home of the brave, land of the free. We sing about freedom, march for our freedoms, argue policy based on freedom, and refuse to comply with mandates which some perceive as taking away their freedom. Every war we have ever fought in is to preserve our freedom. Or, so we are told.

With this frame of mind, I talked to a friend about this challenge and she reminded me that freedom was also about things that you overcome in your life, like her story. And so, dear friends, for the first time ever I'm going to tell you a true story. The story of Akina. The names have been changed. 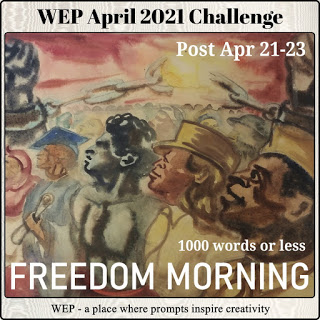 When Love Takes Your Freedom Away

Akina studied her image in the mirror. There was nothing about her auburn locks or hazel eyes to indicate that she was lost. Nothing. But she was…lost.

From the moment she saw Pete and heard his voice she’d been lost. Her need to be loved coursed through her veins to this day. Her memory of the events, hazy even now.

She had woke on the floor of her apartment. Pete was tuned into the football game, ignoring her. Her four-year-old son, Rob, sat on the floor beside her, holding her hand and patting it. His large dark brown eyes studied her face.

“Mommy,” he said when she looked at him.

“I’m okay,” she said to reassure him even though she couldn’t remember what happened.

She sat, and then stood. A little light-headed. Pete continued to ignore her, guzzling the last of his 18-pack of beer. The carton lay empty at his feet.

Akina went to the bathroom, did her business, and glanced at her reflection to see one eye swollen, and the bruise extending down to her cheek. And her lip was cut.

Then it all came to her. She’d been working a crossword puzzle while Pete cheered or bellowed at the football team on the television.

The crowd roared, she looked up, the home team made a touchdown. Pete hated the home team. He stood, grabbed her arm, and yanked her up before punching her in the breast and on her face. Her body twisted away and turned to fall, landing on their son. Everything went black.

How long had she been out? What should she do? She didn’t know and so she went to bed.

In the morning after Pete left for work, she called her mom. Rob was too young for school, and so her mom came and they all went to the hospital. From there, the police arrested Pete and he went to jail for domestic abuse.

Now, close to a year later, as she stared at her own reflection in the mirror, she argued with herself. Follow your heart.

She’d let Pete move back in. She loved him. She needed him. She did it all for her son. He needed his father in his life. Right?

Her mother had spent an hour on the phone trying to dissuade her from this course. But, Akina knew what she wanted. What she needed. And that was Pete.

Her happiness didn’t even last a month. Pete quit his job, refused to do any housework, drank beer continuously, spending her money on it. He didn’t even babysit Rob, her mother did. Pete slept all day and drank all night and wouldn’t let  Akina sleep. Instead, needling her to stay up with him. Exhausted, she started making stupid mistakes at her job.

But she needed him, right? She loved him and he loved her. They had a son together. He’s changed!

Football season started. Pete stood and threw a beer at the TV and then turned on Akina sitting on the sofa next to him.

In the morning, she stared at her bruised and battered face.

But I need him. He will change.

She was trapped. She couldn’t feel anything anymore. And she knew, her love had robbed her of her freedom to choose. Her love had taken her freedom away.

As of this writing, Akina has turned her life around. With her mother’s help, she returned to school and is now a nurse living her best self and supporting her son, now 14, without Pete.

Let me know what you think.

I'm pleased to announce that my epic fantasy, the Treasures of Carmelidrium is now available everywhere. 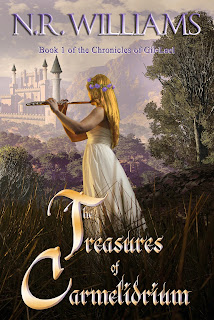 So very sad - and far too common of a tale.

I'm happy for your friend. Love shouldn't be blind. And abuse should never be tolerated or forgiven. She did right to leave her abusive bastard of a husband.

Nancy, thanks for sharing this true tale. It goes to the core of the problem with an abused woman clinging to love, when love is delivered with fists. I'm glad she finally left the troubled loser. I'm glad Adina now knows what it's like to live in freedom, not fear.

Thank you, ladies, Jemi, Olga, and Denise. I'm glad for her too.
Nancy

I'm happy for Akina that she could finally moved on and was not enslaved by her feelings for Pete.
I'm upset that why Akina didn't call 911?

Hi,
Her love didn't rob her of her freedom, but her low self-esteem of herself did. I hate it when women refuse to recognize the difference between love and abuse. Most of the time it is because they have self-hatred within them. They keep looking for someone to accept them and make them feel good when they have not learned to accept themselves.
I also feel sorry for her son. It will be difficult for him when he becomes an adult because of the examples that are being set before him.
Shalom aleichem

Hi,
It's me again. I was so caught up in your story that I didn't read the ending. I am so happy that she got out. I'm especially happy for her son. Now he has a chance to live a normal successful life.
Shalom aleichem

Hi Nancy - well thank goodness she got out before the pandemic hit - it's good to read ... she was able to understand the need to leave Pete and start again ... she sounds like a really kind person ... well done to her - and I'm sure Pete will become an excellent son for her. All the best - Hilary

Hi Sanhita,
I asked her the same thing about 911. In the end, the hospital contacted the police and Pete went to jail for a year.

Hi Pat,
Yes, both mom and som are thriving. It's been ten years.

Hi Hilary,
She is a very kind and caring nurse.

Thank you all for coming by and reading my story.
Nancy

Wasn't this so familiar. But I'm glad love didn't bind Akina. It's hard to break off but sometimes it's the only choice.

Such a sad state of affairs, but it happens on a daily basis. I'm glad she was able to escape. So many don't, too many!

You're right, Yolanda. I'm glad she got out too.

Thank you both for coming by and reading.
Nancy

You captured the dilemma of a love like that very well. And while the person looking in from the outside knows what needs to be done it takes time for the Akinas of the world to figure it out and to admit to themselves that they love the wrong man.
Like you, I struggled with the prompt and would love to have a discussion around this dilemma.

I'd be open to a discussion. You can e-mail me. Thanks for coming by.
Nancy

Leaving an abusive relationship can be so difficult. It's such a sad reality for so many. I'm glad to know she finally did escape and reclaim her freedom in the end.

Congratulations on your release.
Your story is powerful, sad, and yet, inspiring. Abusive relationships have so many layers people on the outside looking in simply can't understand. I admit, I have been very dismissive to people in these types of relationships in the past, but have since learned, it's not so cut and dry. It takes so much bravery and strength to survive an abusive relationship, let alone, get out of one. Thank you for sharing your story for Freedom Morning.
Nicely done!

A very powerful story, and sadly an all too familiar one. I would argue that no child needs an abusive parent, that they set a horrible example and are part of why such behavior continues generation after generation. I'm glad you included the after where she's doing better and has gotten free.

It took my aunt (RIP) 25 years to finally be able to break away from her abusive first husband. My mother has expressed the thought that one of the reasons my aunt developed dementia was because of all the head injuries she sustained while married to this dreadful man. (I refuse to refer to him as my uncle.)

This is too true for far too many. Akina finally saw her way out. The traps women set for themselves are the hardest to escape. Glad she found her freedom. Great take on the prompt.

Hi L. G.,
Yes getting out of an abusive relationship is horribly difficult.

Hi Toi.
Thank you. It's easy to dismiss another person's suffering. I'm glad you acknowledge that you did that and have changed. Me too.

Hi Owl
I'm sorry to hear that about your aunt. Glad she got out. I wouldn't call him an uncle either.

Hi Nila
We are very good at setting ourselves up for failure. I've become an expert at breaking my traps.

Thank you all for coming by and reading.
Nancy

An all too common tale, I believe. The happy ending was a wonderfully refreshing change of pace, well don e

I am so saddened by the desperation of some to find what they need in other people. But I am happy that she found herself in the end.

Well presented story - and I'm glad she has managed to escape from the trap.

Thank you, Christopher, Steph, and Jemimna for coming by and reading. As well as leaving a comment.
Nancy 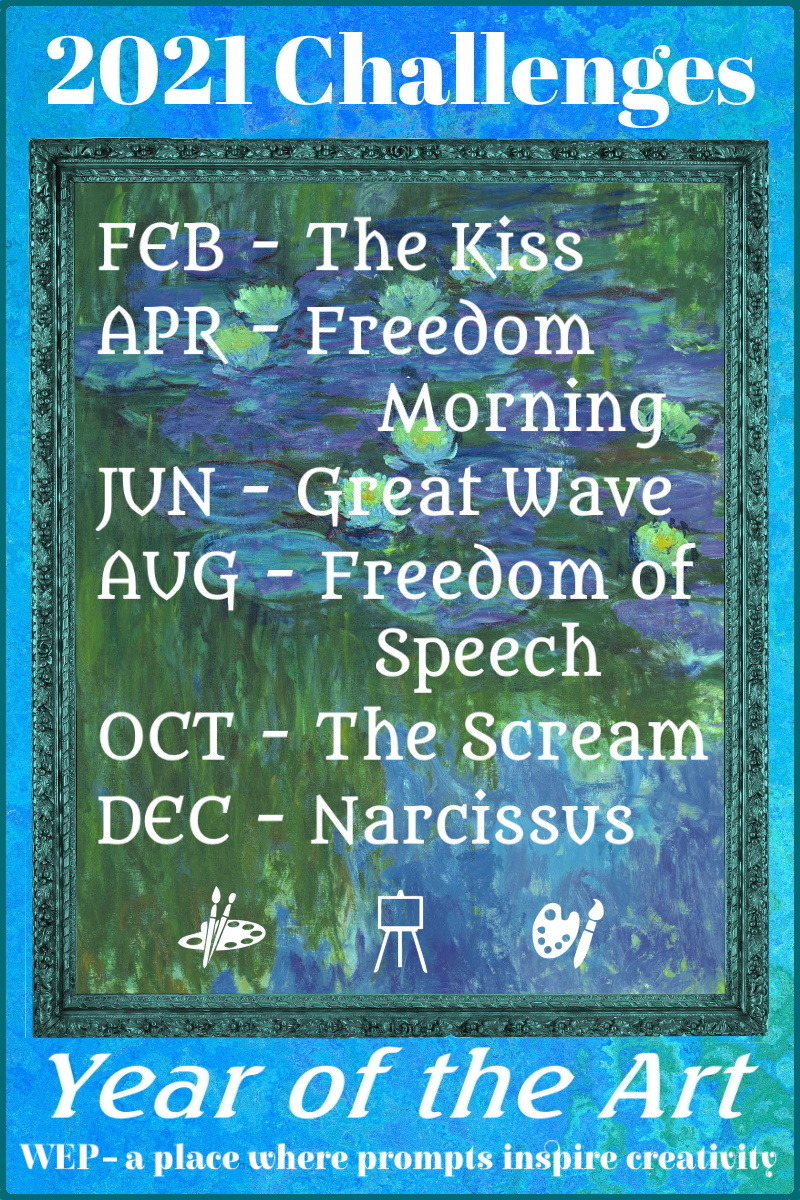 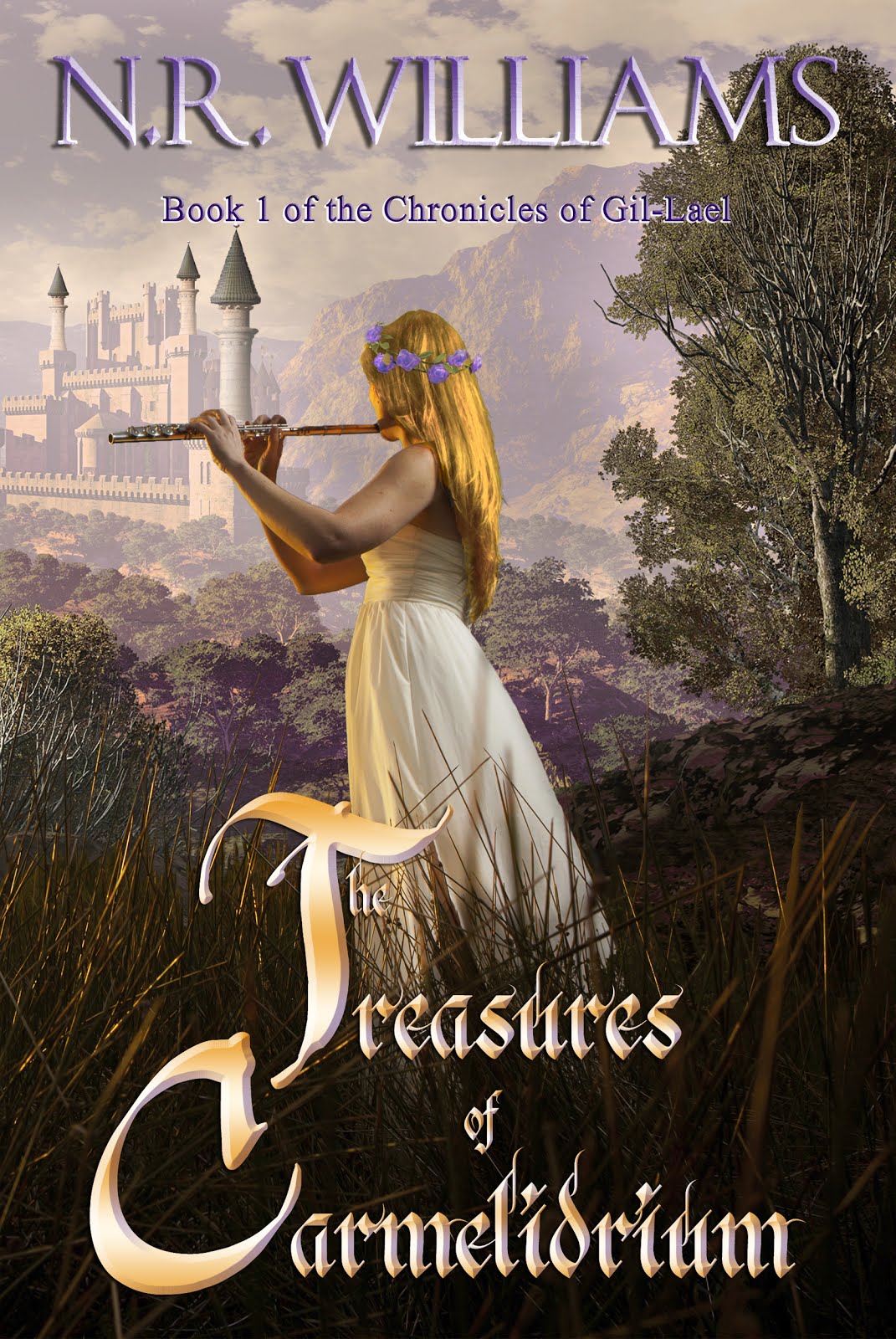 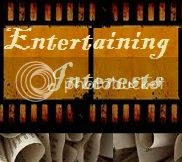